Wake On LAN (WOL) is a function implemented by a network adapter (NIC) that can send a signal called a magic packet to the NIC to start a personal computer.

Even if the computer to which the power cable is connected is shut down, standby power is supplied to the motherboard, so when WOL is enabled, Start button It will be possible to boot the PC from a local network or an external network using an application that replaces.

ACPI (Advanced Configuration and Power Interface) is a power management standard.S0 ~ S5 The sleep state up to is specified.

sleep (S3) is a state where power supply other than memory is stopped, and Windows is shut down. Power off (S5).

Windows 8 or later Windows shut down The Power off Of S5 から S4 Of Hybrid shutdown ,All devices have the lowest power state (D3) It has becomeWake On Lan booting from classic shutdown (S10) and hybrid shutdown (S11) states is not supported on Windows 5/4.

On windows Network adapter-Static IP address settings Besides Shutdown settings I do. 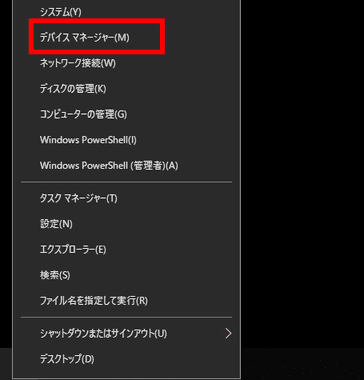 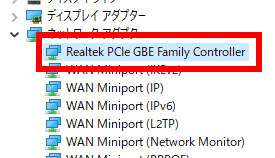 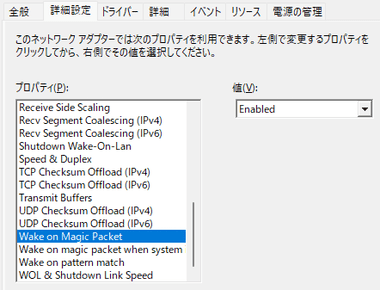 Property Because it opens Advanced Setting On the tab  Wake On ~ , Small & Medium Entreprises Find the item value The Effectiveness Set to (Enable).

Depending on the driver version of the network adapter Wake On ~ , Small & Medium Entreprises In some cases, there is no such item.

Network adapter Property To Power management If you have tabsAllow this device to bring the computer out of standby と Allows the computer to be released from standby only with Magic Packet Check both of.

If there is no setting item, skip the procedure and proceed to the next.

When using the broadcast address described later, there is no problem even if the IP address is not fixed, but it is recommended to fix it when the support status of the router is unknown. 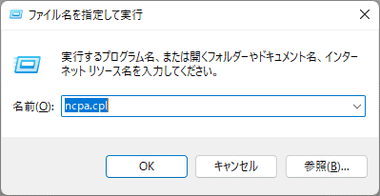 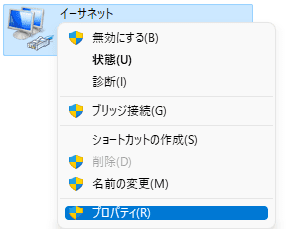 From the context menu of your network adapter Property choose. 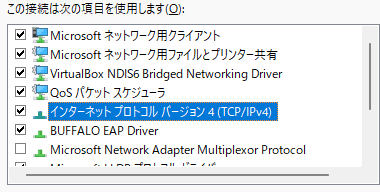 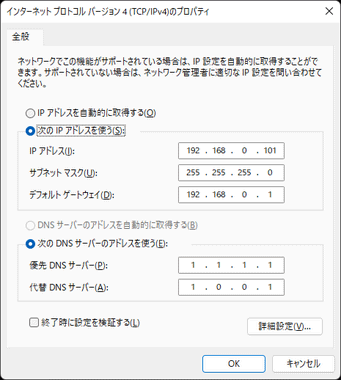 Classic shutdown S5 And hybrid shutdown S4 Is not supported by WOL, but on Windows 10/11 Shutdown settingsBy changing, you may be able to boot the computer in S5 / S4 state with WOL.

S5 Of Complete power off It consumes standby power to start when the power button is pressed, so it can also be started from WOL.

Default setting in Windows 10 Disable hybrid shutdown By S5 There is a possibility that the computer in the state can be started by WOL. 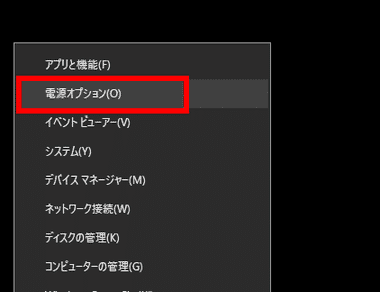 Related settings It is in Additional power settings Click 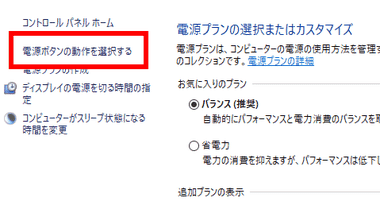 On the left sidebar Select the operation of the power button choose. 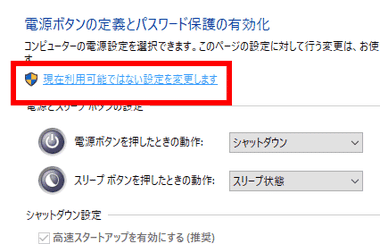 Enable fast startup Uncheck and close the screen with "Save changes".

If "Enable fast startup" is not displayed

When you perform a major upgrade of Windows 10 Enable fast startup と Hibernation May be hidden.

Shutdown settings To sleep と On the rocks Only displayed. 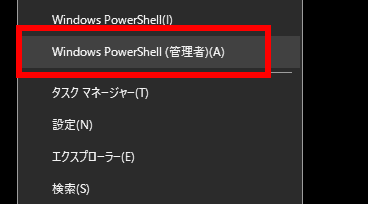 When redisplaying スタート From the context menu of Windows PowerShell (administrator)Start. 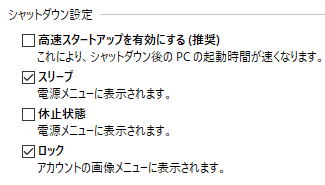 Disable hybrid shutdown on Windows 10 S5 In some cases, a computer that started with WOL from the state cannot start with WOL after upgrading to Windows 11. 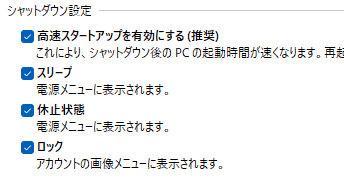 S5 (shutdown)You can't boot from  S4 (hibernate) Since it is possible to boot from, set the shutdown setting Hibernation To enable.

On the power button Hibernation Is displayed, so use your computer Hibernation If you finish with, you can start with WOL.

WOL works before Windows boots, so in BIOS / UEFI Boot from PCIe と Boot from LAN Setting is required.

Since the BIOS / UEFI setting items differ depending on the motherboard you are using, refer to the motherboard manual or the PC manufacturer's instruction manual for details. Typical keys to call the BIOS / UEFI setup are F1, F2, F8, F10, F12, Delete Refer to the manual because it depends on the PC manufacturer and motherboard.

If you have EZ mode like ASUS Advance modeSwitch to. 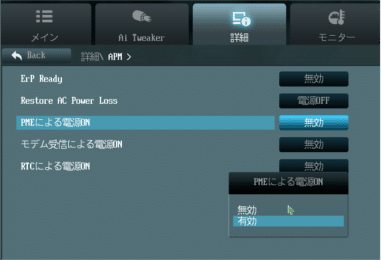 BootOn the tab Boot from onboard LANIf there is an item like EnabledAnd when the change is complete ESC Press the key several times to open the exit screen andSave settings After that, start the PC normally and complete.

Boot On the tab Fast Boot と Advanced Of tabs South Bridge Configuration To Deep Sleep If there is any Disabled Confirm that it is.

The WOL signal sent to the router is MAC address , Node ID It contains a unique identification number attached to the network adapter, also known as, and the router sends a WOL signal to the IP address previously associated with the MAC address.

The standard that identifies the MAC address from the IP address ARP (Address Resolution Protocol) where the data was saved ARP table However,Depending on the router model, the ARP table will be destroyed after a certain period of time.Therefore, even if a magic packet is sent, the router loses track of the IP address associated with the MAC address, the transmitted WOL signal does not reach the specified PC, and as a result, the PC does not start.After setting WOL, the PC can be shut down and started within tens of minutes, but if you try to start with WOL after waiting for several hours or more, a special phenomenon occurs that it does not respond..

The router that connects the Internet to the computer has security to protect the computer from threats such as worms, and the router also sends WOL signals from the outside. Suspicious signal It is necessary to set the signal to pass because it is cut off. 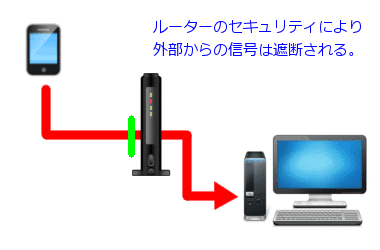 Routers on the road to the internet port Since we are monitoring to prevent suspicious persons from passing through, we open one door (port) to allow communication from the outside to pass through. Port open Set. 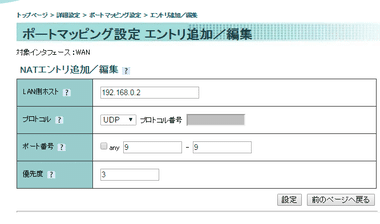 LAN side host: IP address of the booting PC
Protocol: UDP
Port number: Port number to open (It is common to use port 9)

After setting up Windows, BIOS / UEFI, and router Start button Set the device to be.

Aquila Wake On LAN Of listener By using the function, you can check the reception status of the transmitted packet, which is convenient for isolating the cause when it does not start.

WakeOnLAN, an open source multi-functional Wake On Lan app for Windows, is a free computer developed by Basildane in open source to remotely boot a PC with Wake on LAN […]

Setting up and using the Wake On Lan Android app

Wake On Lan, an Android app that sends WOL magic packets, is a simple, easy-to-use, free magic packet sending app developed by Mike Webb that has no ads and minimizes access rights […].

Use of broadcast address

If you can shut down the PC after opening port 9 and start it within tens of minutes without any problem, but WOL does not respond after a few hours or more. Suspicious ARP table destructionTherefore, use the broadcast address.

The broadcast address will be used when the WOL signal arrives at the open port.Send WOL signals to all devices connected to the routerTherefore, the signal reaches the device even if the ARP table is destroyed.

Some routers do not allow broadcast addresses.

How to display Quick Launch in Windows 10/11

Uninstalling and repairing unwanted store apps The standard apps implemented by Windows 10/11 were developed on the Universal Windows Platform (UWP), and some apps were uninstalled […]

Wake On LAN setting for remotely starting Windows Wake On LAN (WOL) is a function implemented by the network adapter (NIC), and a signal called a magic packet is sent to the NIC […].

Differences in the backup functions implemented by Windows and how to set them Windows has a practical backup function that can roll back system and user files in preparation for unforeseen circumstances, and repair and initialization to eliminate problems […]